RSS
← Almost There
Welcome to the United States of America →

Reading Rainbow Nation: The Making of a School Library

I’ll take a break from my usual stories of fund raising and visa troubles to talk about a project that has been a long time in the making but given little attention to here on this blog: the school library.

One of the goals of the Peace Corps South Africa Schools and Community Resources Project is to help to establish and/or improve libraries at the schools where volunteers have been placed. This doesn’t mean simply getting a supply of decent books in the school (though, this is a challenge in itself). Volunteers usually face any and all of the challenges associated with starting a library from scratch: support from the school’s administration, adequate and secure room, decent shelves and furniture, and staff to oversee its organization and daily operation.

There has been little overlap in the day-to-day work that I have done versus the volunteer who served at this school for the two years before my time here. Ryan worked mostly with kids at the high school level, and seemed to focus on math and science. I’ve been concentrating on English for kids in grades 5 through 7, putting in the bulk of my time with grade 6. He left a few months before I arrived, and though I have never met him in person and hadn’t even corresponded with him until recently, I felt like I had gotten to know him through things he’s written, photos hanging in the school’s office, and the lasting positive impression he left on the people here.

The one area I know where we do overlap is working on the library at this school. It’s hard to know exactly how much of what was available here when I started was due to his efforts, but it wouldn’t surprise me to learn that it all came from work that he did. It seems unlikely that teachers here would have labeled books with Dewey Decimal Numbers, and there is a good chance that all of the designated library books were acquired thanks to him.

At the end of 2012 as I was just starting there, new buildings on the school grounds were getting their finishing touches and one of the classrooms was to be dedicated to housing the library. The supply of library books was being kept in the school’s office, out of sight from any child who might want to read them. The school had no book shelves except for some utility shelves where the seldom seen books were sitting. One of the first things I did as a volunteer was to help the principal draft an appeal to the department of education requesting furniture and shelves for the library, as well as furniture for setting up science and computer labs.

At the start of the 2013 school year (in South Africa, the school years start and end with the calendar year), part of that request was fulfilled. In the classroom that was to become the school’s first fully functioning library, shelves were installed. They are very large, metal utility shelves – far from ideal for a school library, but at least a place to start. Also, at that time, Connie, one of the HODs (Head of Department) at the school, was taking a course specific to school library management and made her office within the library itself. The shelves were quickly filled with various textbooks, and the modest supply of library books available. I started planning how and when I would be able to do more for this project.

By the end of the 2013 school year, I had sent several requests to known book donors and organizations that support school libraries in Africa. Unfortunately, I had missed out on an earlier opportunity to get in on a large shipment of books from an organization called Books for Africa that was organized through some other Peace Corps Volunteers. But, I was getting some promising responses from a handful of the requests I had sent, and I made a formal plan for the remainder of my time at the school in 2014, which focused on helping in the library.

Then through a stroke of luck, Liz, a PCV in another part of KwaZulu-Natal, asked if I would be interested in another shipment of books through Books for Africa. Apparently, she had done so well with organizing the shipment earlier in 2013 that they wanted to work with her again to get more books in the hands of kids in KZN through a donation sponsored by Nigeria’s Sir Emeka Offor Foundation. With as many as 20 boxes of books coming, I started researching options for building some honest-to-goodness book shelves.

In the meantime, the 2013 school year had come to a close. Soon after, we had a confirmation date for the shipment from Books for Africa, a promise of one box of books coming directly from Darien Book Aid in the states, and Term 1 of the 2014 school year had started. But by the end of February, even though our books had arrived, I was no longer in a hurry to start on the shelves because I was devoting more time to the grade 6 class than I thought I would be. It would all have to wait until Term 2. But because of the excitement of all the boxes, we were able to recruit some kids on Saturdays to come and help unpack the books and start to organize them.

I found plans online for cheap, durable, low-waste book shelves. I consulted with my dad via email to get a second opinion as to how well they would work in a school. I converted everything in the plans to metric, and put in an order of lumber for one set. My thought was, if I could build one set on my own, I would turn the plans over to the school to make subsequent sets as a school project for some of the older students.

Finally, with the start of Term 2 in April, I was able to move my desk into the library and devote the bulk of my school time there. I was cataloging, organizing, and color-coding this very generous donation of books, setting up a consistent way of checking them in and out, and figuring out how and when I could manage to build some of the shelves they would sit on. Of course, there had already been several delays with my lumber order, but this is nothing out of the ordinary in rural Africa. Finally, in mid-May the principal drove me down to the lumber shop to collect the wood and I set about constructing the shelves.

Following the plans for building the shelves was relatively easy, even though the only power tool at my disposal was a drill. I ordered the lumber in specific sizes, but this is where the problems arose. Widths, lengths, and thicknesses were all inconsistent. The shop I ordered the lumber from seemingly wasn’t able to cut things very exact (or just had little practice doing so, as most of their orders are for the rough-framing of buildings). Additionally, the wood was still a bit damp. I knew the shelves wouldn’t come out as nicely as I originally planned, and because of many slight modifications and deviations from the plans, it no longer seems like an ideal project to hand over to kids at the school. They could still try it; they have the plans and my finished model. 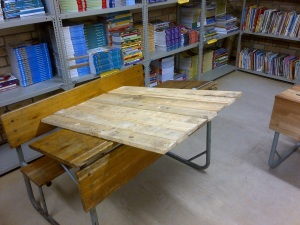 However, the plans did give me an idea of how to modify the utility shelves to be more appropriate for books. Using wood pieces from broken desks, I was able to add over 20 more feet of shelving, with only the cost of some hardware.

Which brings us to the present – a functioning school library, stocked with all kinds of books, mostly fiction for beginning readers, but also lots of resources for teachers and one entire wall dedicated to textbooks for all the subjects offered here (which comes in handy for many kids when they don’t have their own copy of a textbook for several of their classes). As of now, the library is open to students throughout most hours of the school day, and books may be checked out to be taken home (one at a time) to grade four and above. 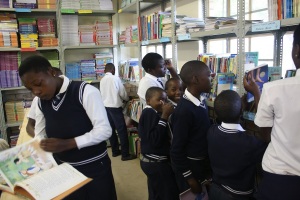 I’m happy to see the school have this functioning resource now, but I am also concerned for its viability in the future. Though the level of excitement for the availability of books differs from kid to kid, there are many who are now coming to the library daily. These children have made themselves especially valuable to the continuation of this library as they are now able to help maintain and organize the library going forward. But, as my involvement with the school is ending soon, having enough dedicated staff for the library is a concern. I hope that teachers in the school have begun to recognize the value of the library and volunteer themselves to maintaining (and even improving) it for the kids at this school in the years to come.

Posted by Erik Hendel on 26 August 2014 in Community, Teaching

← Almost There
Welcome to the United States of America →

2 responses to “Reading Rainbow Nation: The Making of a School Library”